We often struggle to articulate exactly what it is that makes our wedding films unique. Every filmmaker is unique, it can’t really be any other way. Even if you are inspired to use similar tools, your eye for a shot and your choices in the edit are determined by a lifetime of personal experience. So what is it that we are trying to capture as part of our wedding film style?

Love Actually is all around us

And yet, in so many ways, our wedding film style isn’t that unique. You can find the exact essence of what we are looking to capture in the opening minute of Love Actually.

We’ll dissect this clip to show what we mean in the sections below;

You’ll notice that all of this is filmed candidly, with the subjects having no idea that they are being filmed. If the camera man was right up close to them, they would never have reacted with such natural, spontaneous, unfiltered emotion. That is exactly our principal for filming on wedding days. We aim to film with the utmost discretion, because that results in some of the best shots.

Hugh Grant’s voice is wonderful in this, and the text is poignant and inspiring. It is relatable, simple and profound. On a deep level, hearing the voice connects us more to the scene, which is probably just human nature. I always start my films by finding the spoken audio in the footage. It has so much more impact than just using music. The readings you choose can often help with that. Two great examples of films build on great readings are Natalie & Ross’s (her brother’s voice is incredible with that reverb) and Rebecca & James’ film.

You’ll notice that none of these shots are using the latest motorised gimbal, or slider, or crane. They are long lens shots from a tripod, monopod or shoulder held by a cameraman with a rock hard core. But they find the subject and capture it. We are trying to ditch our kit when it comes to weddings, because it hinders us both by the amount of weight it involves, but mainly through being spoiled by choice on what set up to shoot with. When you have only the camera on a monopod, you’re only left with composition, use of light, subject matter, etc to make your shot amazing. You would still want to search for all that if using a gimbal, but by keeping it simple. you have so much more time on the ball. The Mk 1 eyeball is your best bit of kit.

If I could edit to Craig Armstrong scores all the time then I would. The man is exceptional. But probably rather expensive to licence. But in essence, we like to find cinematic, often piano or string based music with gentle lead ins as our signature. That allows us to convey peace and serenity, often as a counterpoint to the excitement in the build up. It draws people in without being too obvious. I don’t want the music to dominate until all hell breaks loose in the dancing. I’ve seen other wedding filmmakers do amazing stuff with lyrical, guitar led music but I just can’t do it. It just isn’t me.

If you’re being critical, as a cinematographer, this footage isn’t perfect. in terms of story, it’s amazing. But some of these shots wouldn’t have passed muster, as they are, on a wedding film;

In this shot, which is the first one, you can see that all the detail in the older man’s face and much of that of the male hugger behind are lost in a flat white shape. Look at the scopes below and you’ll see the highlights are clipped. This happens often enough when you’re filming events, but in the post production process we would colour correct this to bring the highlights down and return the detail to the face. This is one of the main advantages of having a camera with a large dynamic range. 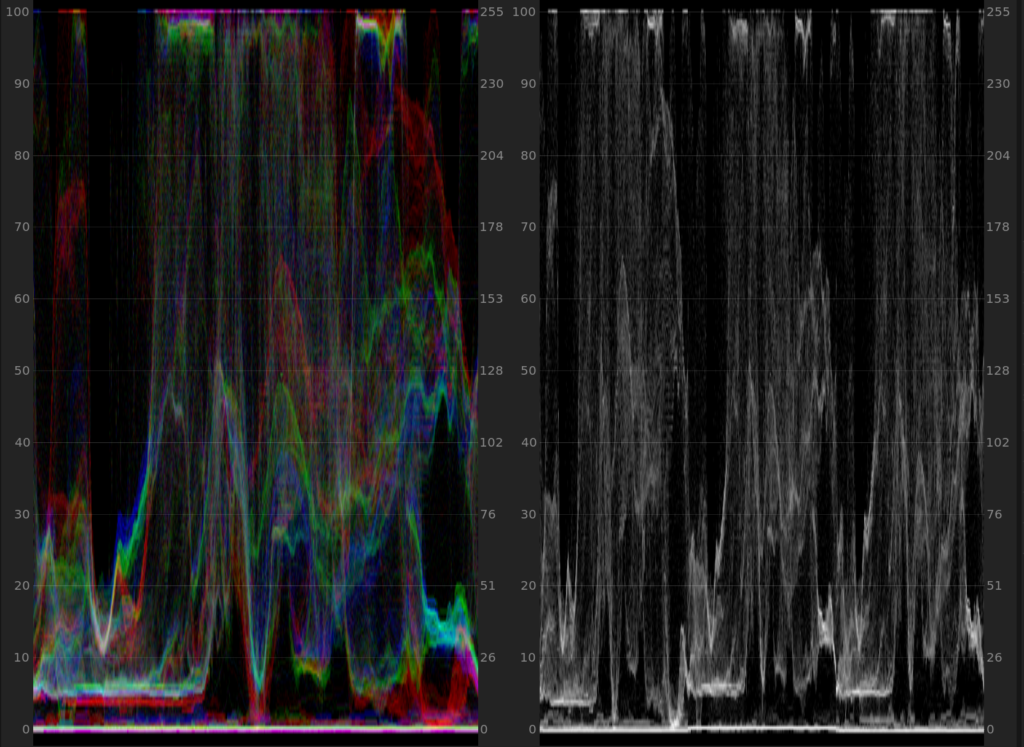 Here’s another example. You won’t really notice this unless you are afflicted by the curse of dealing with these things for a living but have you noticed that the man and boy here are like siamese twins? The highlights are exposed to a level where all detail is gone and you cannot see where one face ends and another begins. Of course, our minds do the work for us. 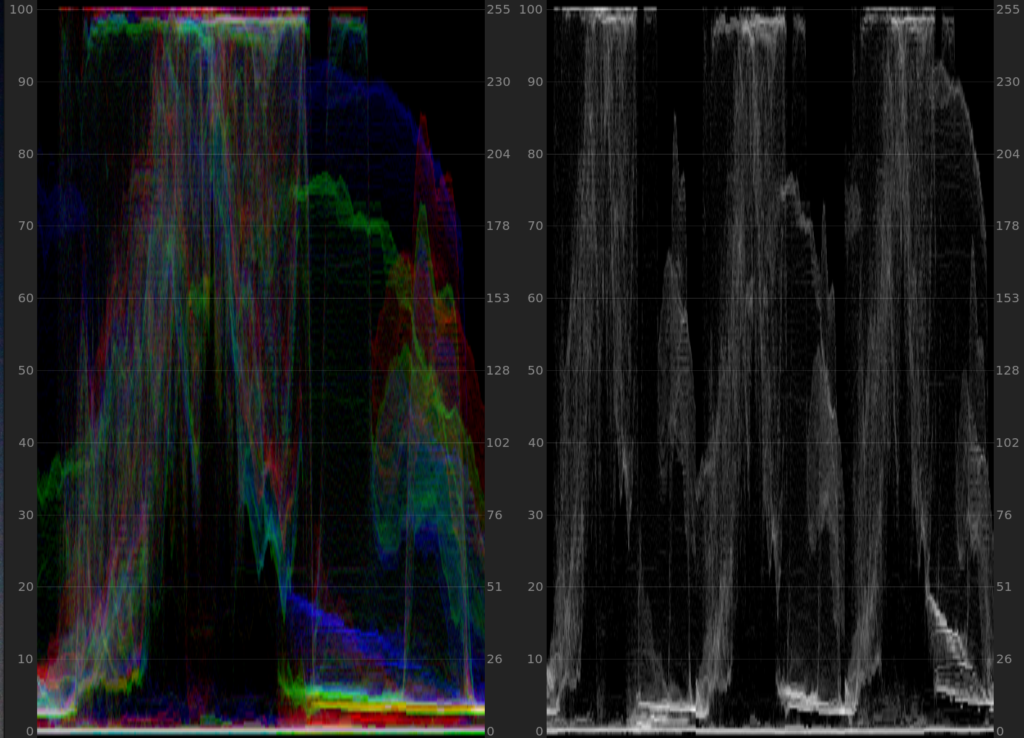 In this second shot, the camera operator notices the action after it has started. In all credit, they finds a focal length and composition quickly, but this wouldn’t make the cut in one of my films. Maybe that is a mistake, as the movement helps add to the sense of excitement and reaction, but in a technical sense, I’d cut everything before the girls face is focussed.

Slightly out of focus

Not enough to worry about, but this is a slightly soft image. It would definitely make it into one of my films though, but I might sharpen it slightly in post. It’s such a lovely shot though, that it would never get cut.

Everything looks better in slo mo, right? Yes, but in this case it looks like they filmed at 24 frames per second and the editing timeline is a 24fps sequence. Slowing it by half means that each frame is being stretched to double its length, which gives that stuttery look. Again though, great shot and having the time to take it in helps you to appreciate the emotion.

That Richard Curtis, his DoP and editor are all well aware of the points I’ve laid out, but by presenting slightly raw footage, it feels so much more like you are there, as an observer, perhaps with a camcorder. That helps drive the story and even more so, it emphasises the fact that, even if these are actors, it makes a distinction between the “real” and therefore more powerful footage and the carefully controlled and orchestrated footage to follow.  As an aside, if they are all candid members of the public, I’d love to have seen the runner having to chase them all to sign release forms. Our determination to get our films as “perfect” as we can get them means we take a long time in the edit. But perhaps we should embrace the rough and ready a bit more or, in the words of that well known philosopher John Legend; “love your perfect imperfections”.